Suggesting spatiality with minimal means and from an extreme flatness: that’s what Sanne Bruggink aims for in her paintings. Each painting consists of abstract coloured sections built up of geometric motifs. By shifting and rotating the motifs, a new pattern is created every time.

In each painting the motifs seem to fight for attention. Depending on their colour, form or position they catch the eye to a greater or lesser degree and depth is created. At least, that’s how it seems. But Sanne Bruggink leaves the struggle unresolved and combines the motifs in such a way that, all things considered, there are no winners: every motif is as strong as the next. The work is simultaneously flat and spatial. This feeling of being ‘unable to put one’s finger on it’ gives the work something mysterious. As though the answer lies hidden under the layers of paint.

The majority of Bruggink’s paintings consist of a sandwich panel under-layer with a thick layer of high-gloss molten resin on top, followed by a few layers of matt acrylic paint. The paintings are seldom rectangular; the edge follows the form of the motifs. These are the guide. But sometimes Bruggink breaks with this principle and the motifs are radically cut off by the edge, whereby the image suggests infinity.

By working in series and then presenting these as a whole, the paintings look like film stills from an abstract animation. Together they make the movement between foreground and background visible. 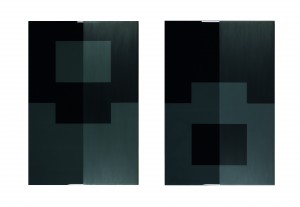